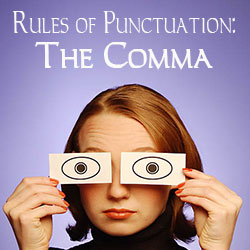 The Comma is one of the most illusive punctuation marks, with more rules than any of its siblings has. Here are the rules of using commas correctly.

1. The most basic use of commas is known universally: To separate the items in a list.

For instance: John’s pets include parrots, a terrier, and a mongoose.

Please note the comma used before and, known as Oxford Comma, as it is used more in British English than in American English. Though many writers avoid it, it is a very important punctuation and should be followed to avoid confusion.

Cathleen, who had an accident last year, is still in comma.

When he found Maria in the street, John ran toward her.

However, you can omit the comma in cases of smaller introductory pieces, where no confusion arises.

By morning John was out of stress.

If the introductory adverbial element seems to apply to the entire sentence rather than only the main verb, commas should be used.

Finally, Maria was able to understand John’s cause of stress.

In cases of confusion as to the meaning, it is always better to proofread and include commas as necessary.

Outside the house was painted in light green.

Outside, the house was painted in light green.

The comma also applies to absolute and infinitive phrases.

To go to the market, Maria got dressed.

4. Use commas in these typographical situations.

When speaking about a place name and state or country.

Maria found John for the first time in Atlanta, Georgia.

When she found John in Atlanta, Georgia, Maria was very impressed in him.

After elements like etc., e.g., i.e., and titles like Jr., when they do not end the sentence.

6. Use commas to set off quotes.

John seemed puzzled when he said to Maria, “I cannot quite bring myself to explain the circumstances.” And note two commas here:

“If you feel that way,” Maria said, “I may be inclined to think it over.”

However, this rule is not applied when using quoted entities with that or in one-word quotes.

Maria’s statement that “I cannot help crying” made John miserable.

Maria said “thanks” when John proposed her.

7. Use a comma to separate independent clauses separated by and, but, or, etc.

John saw Cathleen speeding up the street, and within moments her car crashed against a massive truck.

8. Use a comma to set off contrasting phrases.

John tried to tell Cathleen that he was in love with Maria, not with her.

In composition, always proofread for clarity and congruence to make your writing better. A comma is a very valuable punctuation element, which at the same time is very hard to use correctly. It is used mostly to help prevent confusion, and a skilled writer doesn’t overuse commas.