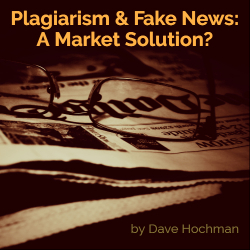 Recently we’ve seen plagiarism make national news after incidents involving Melania Trump and Betsy DeVos, but the sad reality is that plagiarism isn’t limited to politics or the mainstream media. The truth is, in the age of the Internet, plagiarism runs rampant. I know this because I was recently plagiarized, and it would have gone unnoticed if not for a quick Google search.

A few weeks ago I happened to be looking for an article that I wrote for VC-List.com entitled “The Do’s and Don’ts When It Comes to Approaching VCs”, and I couldn’t find it saved on my desktop, so I simply Google searched the headline. Upon doing this, I was unpleasantly surprised.

Right underneath my article for VC-List was the same exact article on AlleyWatch.com (see screenshot) 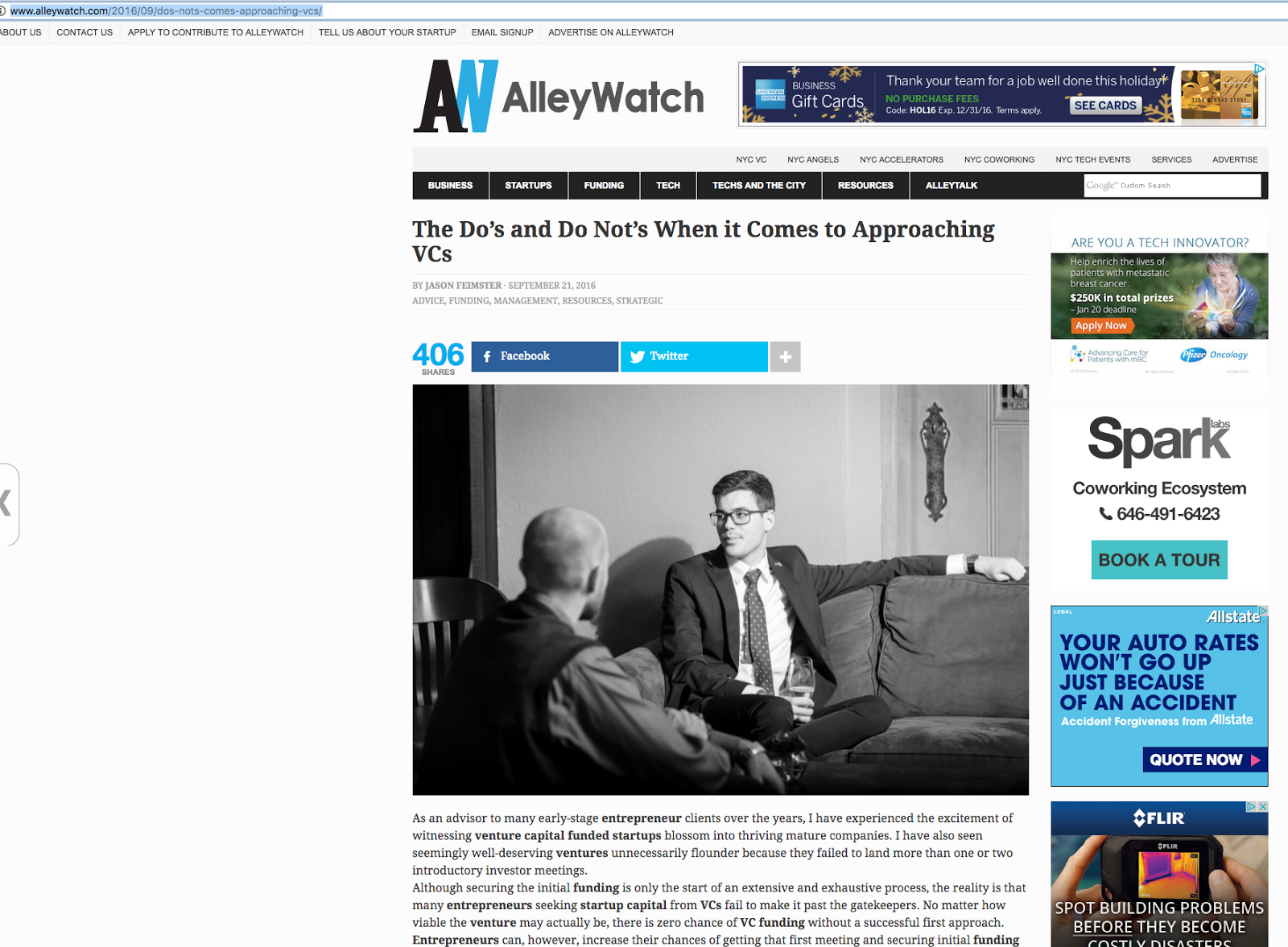 …except my name wasn’t in the byline…..and a one “Jason Feimster” was. I can’t say I was surprised, given the state of certain corners online journalism today, but I can assure you that I was aggrieved. The article that I wrote contained quotes from three exclusive interviews that I had privately conducted with some of the leading minds in venture capitalism. Ian Sigalow, Bob Goodman and Brent Sonnek-Schmelz spoke with me because they know me and my reputation.

I promptly emailed Reza Chowdury, the founder of AlleyWatch.com, about the problem. Although I had to press him multiple times for a response, eventually Chowdury did respond, explaining via email that AlleyWatch had requested the rights to my article from Feimster, who posted my article to his personal LinkedIn page as if he himself wrote it, and that Feimster had granted them republishing rights.

So, in effect, Feimster pretended that my original content was his own and AlleyWatch didn’t do anything to confirm this before publishing. On top of that, in a series of emails with me, Chowdury told me that “articles from AlleyWatch are copied in their entirety, nearly on a daily basis. It’s just a reality of the era of the internet and we act accordingly to prevent and respond to those circumstances.” However, it’s very clear that AlleyWatch does not act accordingly when it comes to plagiarism, because, in effect, they themselves engage in plagiarism…although I will give them the benefit of the doubt and assume it occurs unintellionally.) Also, Feimster’s author page still remains intact on AlleyWatch.com and, as of 2/23/2017, my plagiarized article still appears on Feimsters’ company website. (see screenshot)

As a result of all this, I consulted Andy Alexander, a Visiting Professor at my alma matter Ohio University’s E.W. Scripps School of Journalism. Alexander has worked in journalism for over 40 years, and has held prestigious roles such as Ombudsman for The Washington Post.

“I would presume that plagiarism occurs more frequently in the digital age because it’s easier. In an earlier era, plagiarism typically required laboriously conducting library research and then copying passages from a publication either by hand or with a typewriter. Today, a plagiarist has instant online access to vast amounts of information and can cut and paste with ease,” Alexander said. “At the same time, I think we hear about cases of plagiarism with greater frequency simply because they are easier to detect. Plagiarism detection software is widely used in newsrooms and other organizations, and that probably increases the odds of getting caught.”

Alon Yamin is the co-founder of the VC-funded startup Copyleaks, a plagiarism detection site like the one Alexander mentioned, and he started Copyleaks because he envisions a market solution for the multitudes of cases exactly like mine.

“I feel like, today, plagiarism is everywhere and it’s a real problem. But, I’m hoping cases like this as well as higher profile ones will create some awareness to the situation and I’m hoping that the situation will get better,” Yamin said. “It’s been made known that basically plagiarism can ruin your career, as we’ve seen in some of the more famous cases.”

If it weren’t for a coincidental Google search that I did, I may not have ever realized it happened to me, since neither Jason Feimster or AlleyWatch.com really have any impact on anything I’m involved in. Nonetheless, it’s important for writers and PR professionals alike to be proactive about plagiarism. It’s smart to use tools like Copyleaks to make sure that your content belongs to you and you alone. In fact, when people ignore plagiarism, they’re not only doing themselves a disservice, their making the practice more acceptable and showing the con-artists and intellectual capitial theives that they can get away with it. Plagiarism is nothing less than theft, as Alexander explained.

“I’ve been a journalist for more than four decades. From my earliest training in journalism school at Ohio University, and through my long career as a reporter and news manager, plagiarism has always been widely viewed as a mortal sin,” Alexander said. “I hope that notion prevails. At its core, plagiarism is theft. Stealing the hard work of others and presenting it as your own is fundamentally dishonest and is at odds with ethical journalism.”

“I think it’s important for victims of plagiarism to speak up. The problem will grow worse if plagiarists are able to cheat with impunity,” Alexander said. “Exposing cases of plagiarism – and doing it publicly, is necessary – it sends a message that it’s wrong and shouldn’t be tolerated.”

This is why I’m writing this recap. It’s not only a problem for writers, but plagiarism presents a blatant trust issue with a publication and its readers. As we all know, pageviews lead to ad revenue and there is real money at stake.

“It’s really affecting revenues because Google and Bing basically penalize you if you have plagiarized content on your site or if someone copied from your site,” Yamin said. “We started from there and then we also, of course, realized that this is a pretty generic solution. So, we turned around and made it available for the publishing industry so they could be able to track their own content to see who used the content, or to see if it was plagiarized.”

By writing this, I’m hoping to get ahead of the curve and help prevent plagiarism from occurring. As Alexander stated, it’s important to publicly document cases of plagiarism, because if it goes undocumented, the problem will grow worse as plagiarizers cheat with impunity.

A veteran PR consultant to many successful businesses, Dave Hochman is the owner of DJH Marketing Communications, a PR and content marketing firm in Red Bank, NJ. Please go to www.djhmarcom.com and @davehochman on Twitter. Dave may be reached at djhochman@djhmarcom.com