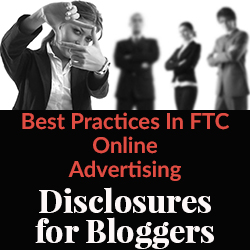 In a previous article, available here, I addressed the main issues bloggers should be aware of in the March 2013 Federal Trade Commission (“FTC”) guidelines regarding if and when disclosures must be made in connection with online advertising (the “Guides”, which are available here).  That article generated a great deal of questions about specific examples of when disclosures may be required.  While I cannot provide specific legal advice, I hope this article will help to address many of those questions.

The first thing to consider is whether your post, Tweet or Facebook status update is offering an opinion or making a claim about a product or service.  If it does, did you receive anything of value related to that product or service or did you have any connection to the company offering the product or service at the time the claim or opinion was made?  If you did, your communication could be considered an advertisement and a disclosure would be required.  According to the FTC the purpose of disclosures is to “ensure that consumers receive material information to assist them in making better-informed decisions.”  “Material information” isn’t defined by the FTC, however a common sense approach is to put yourself in your readers’ shoes and ask “would I want to know this if I was reading this post?”

As a hypothetical, assume a popular food blogger, Lisa, is writing a post reviewing a new blender, the Mix-O-Matic 3000, and she gives it a positive review.  Suppose she received the blender as a gift from her father (who has no relationship with the company that made the blender, Mix-O-Matic Corp.).  The Guides would not apply since Lisa didn’t receive anything of value from Mix-O-Matic Corp. or have a connection with anyone associated with that company.  Should she disclose that it was a gift?  Lisa is not required to under the Guides, but sharing that information may increase the credibility of her review with her readers.

Now assume instead that she bought the blender herself, but her father works for Mix-O-Matic Corp.  According to the FTC where “there exists a connection between the endorser and the seller of the advertised product that might materially affect the weight or credibility of the endorsement (i.e., the connection is not reasonably expected by the audience), such connection must be fully disclosed.”  Since the connection between Lisa and Mix-O-Matic Corp. would not be “reasonably expected” she should disclose that her father works for that company.

As discussed in my previous article, disclosures must be “clear and conspicuous” and “should be placed as close as possible to the claim they qualify.”  “Clear and conspicuous” is not defined in the Guides.  However, the FTC offers this guidance, “[t]here is no litmus test for determining whether a disclosure is clear and conspicuous, and in some instances, there may be more than one method that seems reasonable.  In such cases, the best practice would be to select the method more likely to effectively communicate the information in question.”

So at a minimum Lisa should include a statement early in the post that her father works for Mix-O-Matic.  What if Lisa’s blog auto publishes links to new posts via Twitter, Facebook, LinkedIn, etc., is a disclosure required in the tweet or status update?  It will depend on what is communicated in that tweet or update.  Suppose the title for her post is “My Take On The Mix-O-Matic 3000” and the tweet or update reads “Lisa just posted a new entry:  My Take On The Mix-O-Matic 3000.”  No disclosure is likely required because there is no endorsement of the blender in the title, it is a neutral statement.   A reader won’t see the claim she’s made (a favorable review) until they read the post which includes the disclosure.  What if instead the post was titled “Why I Love My Mix-O-Matic 3000.”  Now a claim about the blender is being conveyed in the title, and therefore in the tweet or update, and a disclosure would be required (the FTC suggests “#paid ad”, “#paid”, or even “#ad” may be effective disclosures where space in the communication is limited).

Now suppose instead that Lisa was given the blender by Mix-O-Matic Corp. directly for the purpose of writing a review and that she may be paid for her review in the future.  At the time she writes her review she should disclose both that Mix-O-Matic Corp. gave her the blender and that she may be paid for the review, even though she hadn’t been paid at the time she wrote it.  Alternatively, what if Lisa was not promised financial compensation and was instead told that she may be chosen to appear in a future Mix-O- Matic 3000 television ad?  According to the FTC a potential television appearance is a “benefit” that must be disclosed.  However, if Lisa purchased the blender herself and Mix-O-Matic Corp. made the television ad offer after seeing her positive review she likely does not need to revise her original post with a disclosure about the offer because there was no potential benefit when the review was written.  Although, putting yourself in the position of Lisa’s readers, would you consider her more credible if you saw an update to the original post mentioning that she appeared in the ad only after her review was written?

As shown above, and as I stated in my earlier article, whether or not an FTC guideline applies to a particular activity is a highly fact specific question and bloggers should consult with an experienced e-commerce attorney if they want specific advice on their situation.  When offering opinions about, or even mentioning, a company’s product or service ask yourself if there is information you could provide that would help your readers make a better informed decision about whether to purchase that product or service.  If the answer is yes and you disclose that information you are not only likely complying with the Guides, you are also building credibility with your readers.

Mark is the co-founder of Davis & Leonard LLP, a boutique intellectual property transactional and litigation firm in Sacramento, California. Mark’s practice is focused on copyright and trademark prosecution, enforcement, licensing, and litigation in the areas of trademark and copyright infringement, e-commerce, computer intrusion, Trademark Trial and Appeal Board proceedings, and ICANN Internet domain name disputes. Mark is the Chair of the Executive Committee of the California State Bar Intellectual Property Law Section (“IP Section”), the Vice-Chair of the IP Section’s Legislation Interest Group, and Secretary of the IP Section’s Trademark Interest Group. Prior to practicing law, Mark worked in government at the federal and state levels as a legislative staff member, spokesperson, and in the public relations field where he specialized in media relations and crisis communications training.